Cleveland Metroparks Zoo in Cleveland, Ohio is a 183-acre zoo. It has over 3,000 animals and 600 species. It is accredited by the Association of Zoos and Aquariums. 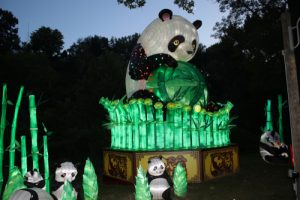 The Cleveland Metroparks Zoo was founded in 1882. When it first opened it only held animals from the local area. In 1907, the zoo moved to its current location in Old Brooklyn and got an elephant. In 1910 the zoo began to expand. It added Monkey Island, sea lion pools, and a bear exhibit. By 1940 the zoo had grown even further and was taken over by the Cleveland Museum of Natural History. In January of 1959 Big Creek flooded and several buildings were lost, including the entire reptile collection.

The zoo continued to expand despite this setback building the Primate, Cat and Aquatics building in 1975, the Rainforest in 1992, and Wolf Wilderness in 1997. The Cleveland Metroparks Zoo added the Australian Adventure in 2000 and the Sarah Allison Steffee Center for Zoological Medicine in 2004. Today it is a world-class zoo with over one million visitors a year. Recently, the zoo has expanded even further, adding the Asian Highlands in 2018 and Rhino Reserve in 2020.

The Cleveland Metroparks Zoo is divided into several areas showcasing different regions of the world and the animals found there. The Australian Adventure features dingos, kangaroos, and koalas. The African Savannah showcases African elephants, zebras, giraffes, and more. At the Northern Wilderness Trek, you can see wolves, beavers, and bald eagles. The Primate, Cat & Aquatics building features gorillas, cheetahs, and most of the zoos aquariums. Waterfowl Lake houses a trumpeter swans, a variety of ducks and geese, flamingoes, and an ice cream shop.

The Rainforest is a huge building separate from the main zoo. In this building, there is a vast variety of animals from poison dart frogs to orangutans and everything in between. In the newly designed Asian Highlands, you can find snow leopards, tigers and red pandas. If you visit the newest exhibit, Rhino Reserve, you can see a herd of endangered black rhinos. With the Cleveland Metroparks Zoo boasting over 3,000 animals from 600 species, there is truly something for everyone.

The Cleveland Metroparks Zoo hosts several special events and programs throughout the year. During the summer months, they host day and overnight camps for children. They also have a “Keeper for a Day” program, which is open to middle school, high school and college students who are interested in a career working with animals. The zoo also hosts “DINOSAURS!” during the summer months which features large animatronic dinosaurs throughout the zoo. For the holidays they have Boo at the Zoo which allows children to wear costumes and trick or treat around the park. For the end of the year, they host Noon Year’s Eve. This event celebrates the end of the year complete with a ball drop at noon.

The Cleveland Metroparks Zoo is a world-class zoo that is well worth the visit. If you ever find yourself in Cleveland, Ohio, make sure to put this zoo on your itinerary!